New Coloring Book: Remembering the Ladies by Carol Simon Levin to be Released in October!

Hello and Welcome to the Girls Succeed blog.
I'm excited to introduce you to my friend, author, speaker, librarian, Carol Simon Levin. She has created an amazing coloring book, “Remembering the Ladies” celebrating over 50 courageous and tenacious women who fought for equality. She plans to have the book published in October 2016.
Carol--Why is this coloring book different?

Here's the image for the coloring book created by Laura Davidson

Today we are privileged to be one of the first to have a sneak peek at some pages from the coloring book. Carol is sharing the story and coloring page about Shirley Chisholm, The first black congresswoman in the USA. In 1972, Shirley Chisholm decided to run for the highest office in the land -- president!  She knew she couldn't win but she wanted a way to speak to all of America about the poor, minorities, and the Vietnam War.   She campaigned hard but won only 152 votes at the Democratic convention, a tiny fraction of the 3000 needed to win. Read more about Shirley below. 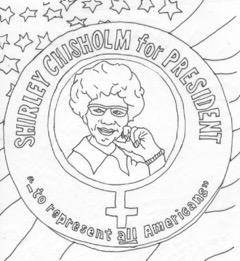 Shirley Chisholm (1924-2005)  "Unbought & Unbossed"
Born in Brooklyn to immigrant laborer parents, Shirley spent her primary school years with her grandmother in her parents' homeland of Barbados.  She appreciated the excellent education she received there in a one room strict British-style school -- writing in her 1970 autobiography, "If I speak and write easily now, that early education is the main reason."  Shirley returned to the states in 1934 and later enrolled in the integrated Girl's High in Brooklyn, continuing on to get a B.A. at Brooklyn College.  Though she was a prize debater there, she never  dreamed of running for political office -- who would vote for a black woman with a Caribbean accent?  She married, taught nursery school and earned a Masters in Education from the Teacher's College at Columbia University in 1952.  Over the next decade, she became director of two day care centers.
Seeing the difficulties faced by the families, Shirley became an advocate for early education and child welfare and in 1965, she was elected to the New York State Assembly. There she succeeded  in getting  unemployment benefits extended to domestic workers and sponsored legislation which gave disadvantaged students the chance to enter college.  In 1968, when a new seat was created in a district with African American, Jewish, and Latino voters, Shirley decided to run and, after a tough race, she won.   She was the nation's first black congresswoman.   In Washington,  she staffed her office entirely with women -- surprising everyone since women in most Congressional offices were  few and far between, with the exception of secretaries.   She spoke out strongly against the Vietnam War calling it "immoral, unjust, and unnecessary" and said that the money spent on war would be much better spent helping people with housing, food, and educational programs.
In 1972, Shirley Chisholm decided to run for the highest office in the land -- president!  She knew she couldn't win but she wanted a way to speak to all of America about the poor, minorities, and the Vietnam War.   She campaigned hard but won only 152 votes at the Democratic convention, a tiny fraction of the 3000 needed to win.  Shirley returned to Congress and continued to fight for the change she believed in.  Later she became a professor at Mt. Holyoke College teaching politics and women's studies  and co-founded the National Political Congress of Black Women.  Once asked how she wished to be remembered, she said she'd like her gravestone to read "Shirley Chisholm had guts."*   In 2015, Shirley Chisholm was posthumously awarded the Presidential Medal of Freedom.

Fascinating Factoid: In the 2008 Democratic presidential primary season,  Barack Obama and Hillary Rodham Clinton staged their historic 'firsts' battle – the victor would either be the first major party African-American nominee, or the first woman nominee – but Chisholm's 1972 campaign paved the way for both of them!

Visit: The Shirley Chisholm Center for Research on Women at Brooklyn College.  Brooklyn, NY.
# # #
A companion program will be available for booking in the fall of 2016. Contact Carol for scheduling this or any of her other performances.  You can also keep up-to-date on all her programs at her Facebook Page.
# # #
I supported Carol's Remembering the Ladies kickstarter project. If you would be interested in learning more about this unique book and supporting the publishing of it, please visit the kickstarter page at https://www.kickstarter.com/projects/tellingherstories/remembering-the-ladies-a-coloring-book
Carol has contributed articles to the Girls Succeed blog about trailblazing women. Click on the names to read about them.
Aviator Elinor Smith
Aida de Acosta: the New Jersey Girl who became the "First Woman Aero-driver in the World!"
Bridge Builder Emily Warren Roebling