What an historic weekend!! Hello and welcome to the Girls Succeed blog!

The inauguration of the President of the United States, Donald J. Trump, was celebrated on Friday, January 20. The impressive ceremony incorporated the tradition that has taken place every four years since 1789 when George Washington took the oath of President of the USA.

The inauguration is not a party given for the President, but rather it is a celebration of the passing of the peaceful transfer of power from one administration to the new incoming administration. The election was bitter, but even with all the divisions, the parties came together in peace.

Throughout the world, women ( and men) marched together for awareness and change. Pastor Laurie Haller explains why she marched on Saturday.

"God bless the millions of women, men, girls, and boys around the world who are marching today. Thank you for marching in love on behalf of equal opportunity for women and all those whose human rights, deepest yearnings, and dignity are minimized or denied because of gender, race, class, sexual identity, or entrenched attitudes of privilege." --Laurie Haller, Facebook Post

What an exciting world we live in. My mother always said, "Nothing is so certain as change." Hang on and have an open heart to meet the challenges and acceptance of change that is good for all.


Pastor Laurie is one of the many role models I interviewed in Girls Succeed! Stories Behind the Careers of Successful Women, an interactive ebook to inspire and empower girls.
You can sample or download your copy here at amazon.
Posted by J.Q. Rose at 2:35 PM No comments:

Thank you to Dr.King and those brave people through our history for trailblazing a path to freedom, equality and justice for all. 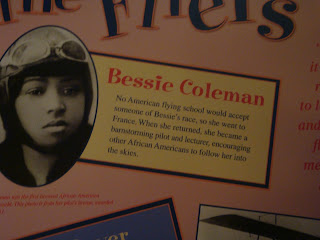 Bessie Coleman was a pioneer in aviation and a trailblazer who broke down barriers of racial prejudice and discrimination of women of all colors.

Bessie grew up poor on a farm in Texas. She was the tenth of thirteen children who helped her parents work the farm. Looking for a better life, she joined her brothers in Chicago and supported herself as a manicurist in a barber shop. The idea to become a pilot was sparked when she listened to her customers talk about flying military planes. It was her dream to become a flyer, but at that time no flying schools accepted black men OR any women. She had to find a way to learn to fly even if she was a woman and she was brown-skinned.

She worked hard and raised money to go to France to attend flying school there. She learned her lessons and practiced her flying skills to return to the USA with an International Pilots License becoming the first American to ever receive one.

Being the daredevil she was, Bessie took up barnstorming. She performed stunts in the air flying her bi-plane, a plane with two wings, in air shows becoming part of the aerobatics high above the ground. She looped through the sky, performed figure eights, and dived from high above pulling up just in time not to crash into the ground. She was a hit with the crowds, but performed only in locations which allowed black folks to attend. She became so popular she earned the nickname, Queen Bess.

Bessie's career was cut short when the plane she was practicing in for a performance crashed and claimed her life. The world mourned her passing, but celebrated her accomplishments as a courageous woman and an inspiration for African-Americans and all women in the aviation industry.