Adrianne Haslet will not let the bombers who disrupted the Boston Marathon last week ruin her dream of dancing. The blast blew off her foot, but with skilled doctors and caring medical staff, and a will that will carry her on, Adrianne will dance with grace again using a prosthetic foot.

Find out more about Adrianne at this ABC News link.
Posted by J.Q. Rose at 10:53 AM No comments:

Margaret Thatcher was the first female Prime Minister of the United Kingdom and the only woman, so far, to have held this office. The funeral services for this outstanding politician who changed the world will be held on Wednesday.

She first served in parliament and rose to become the first lady to be the head of a major political party in the United Kingdom. She was elected to the office of Prime Minister in 1979 and served three terms from 1979-1990. She holds the record as the longest serving British PM in the 20th century.

PM Thatcher was 87 when she passed away leaving a legacy of good works and successes in her life.
Posted by J.Q. Rose at 2:28 PM No comments:

Meet Kat the Teen Witch from the Witches of Galdorheim Series

If you are into magic. imaginative characters, and locations, then you'll love these stories. I mean really, Ms. Dasef has cooked up a stew of amazing characters and situations which will make you laugh and cry. You will cheer for Kat the teen witch and boo the mean old hag. It's a fun read!


How Does a Fantasy Girl Succeed? by Marva Dasef

It doesn’t seem fair to compare regular humans with fantasy characters. After all, most fantasy characters have some magic to back them up. But if a fantasy girl, in this case a witch, doesn’t have control of her magic, she has to draw on her girl power to succeed instead.

Katrina (Kat) has a witch mother and a regular human father (witches are also human, but just happen to have talents we regular humans don’t). She’s got the witch power churning inside her, but every time she tries to use it...well, it ain’t pretty. Her poor bunny has to put up with being turned into green goo and furniture breaks instead of levitating.

She’s a little jealous of her half-brother’s ability to use his inherited magic and knows she’ll never come up to the high standards of her mother, aunt, or any of the other witches on Galdorheim, the witches’ home island in the Barents Sea.

Her father, frozen in an ice cave when Kat was a tot, came from the Sami tribe of hunters and fishers who live in the farthest northern reaches of Siberia. Kat figures if she’s a magical failure, she should find her father’s family and live with them. So she decides to run away from home. Not an easy feat when you live on a ice-bound island in the Arctic.

She has what it takes to succeed. Not magic, but grit and determination. Nobody succeeds if they’re giver-uppers. She does enlist the assistance of an elderly and crotchety witch, Mordita. Without magic, Kat has to obtain some cold weather gear. Any of the other witches on the island would conjure it up themselves. So think of Mordita has Kat’s answer to having an Eddie Bauer’s store in town.

She also asks her brother for a couple of spells-to-go which she can invoke safely (e.g., without blowing up or turning anything into green goo). When Rune hears about her decision to leave, he insists he has to go along to help. Another thing a girl who wants to succeed can do is to call on others to help. Not to DO her work, but to mentor or provide tools she can use on her journey to success.

To find out how Kat does in her quest, check out the Witches of Galdorheim series. They’re available in ebook and print formats from Amazon. Here’s a bit about all three books in the series.

BAD SPELLING
A klutzy witch, a shaman's curse, a quest to save her family. Can Kat find her magic in time?

Follow the adventures of Katrina and her half-vampire brother, Rune, as they chase down an evil shaman. Dodging the shaman's curses on a dangerous trip across the ice-bound arctic seas, they meet both friends and foes. Kat and Rune must find the shaman and stop him before their beloved island home is destroyed.

MIDNIGHT OIL
Shipwrecked on a legendary island, how can a witch rescue her boyfriend if she can’t even phone home?

Traveling with her newly-found grandfather, a raging storm catches them unawares. Kat is tossed into the icy seas, while her brother and grandfather travel on to find help. Kat is rescued by an unlikely creature, and Rune is captured by mutants. Only the magical Midnight Oil can save her brother, but an evil forest elemental is trying to stop her.

SCOTCH BROOM
A magical trip to Stonehenge lands a witch in the Otherworld where an ancient goddess is up to no good.

Kat is on her way to an exciting trip to a faroff land, but is led astray by a jealous rival. Caught in the Otherworld with a has-been goddess trying to kill her, Kat has to defeat the goddess and rescue her brother from the hag's clutches.

To get links to the series and other books by Ms. Dasef, check out these sites: 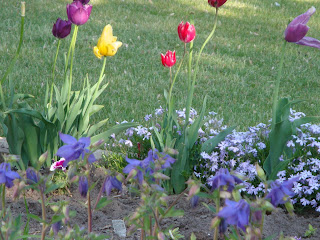 Welcome Spring! The daylight is longer and the breezes warmer as we enter into anticipated Spring weather. Oh I know Spring is a bit temperamental at times. Last year in Michigan March was warmer than April fooling the fruit trees in to blooming early. An unusually cold April came along and froze the blossoms. Farmers had a bad year due to the capricious spring weather.

I'm looking forward to a wonderful spring full of flowers and foliage and a summer brimming with abundant  fruit and veggies. How about you?

To celebrate the arrival of Spring, I'm offering my book for girls, Girls Succeed: Stories Behind the Careers of Successful Women at a 25% discount. The price was $3.99, but now is available for  $2.99.

This e-book about careers includes interviews with fifteen remarkable women who have achieved recognition for accomplishment in their occupations. This diverse group of careers encompasses women in the arts, business, science, medicine, ministry, entertainment, and sports. Stories include women who have stamped out disease, made people laugh, earned Olympic and Paralympic gold medals, crossed the country in the cab of an eighteen wheeler, and many more chapters to inspire and empower girls to reach for their dreams.


Here's what reviewers say about this non-fiction book for girls 9-14 years old.

How many of us have dreams when young which we never realize? The women in this book have all achieved their dreams and are to be applauded for their efforts. All worked hard to get to the level they desired, but some had to work harder than others when life put obstacles in their way. They're not all high flying professional women, their goals range from chef, to minister, to scientist to gold medallist.

This book is well written and very informative. If you have a dream you don't think you'll be able to attain I suggest you have a look at this book. It will certainly give you inspiration for your own goals.
(reviewed long after purchase)
Review by: Rochelle Weber on Nov. 18, 2012 :

This is a wonderful book. It contains the stories of several women in many walks of life who have pursued their dreams and succeeded in reaching them. Each story starts with the age at which the woman decided what she wanted to be when she grew up, and then tells how she reached her goal. In some instances the women went to college and got one or more degrees in order to pursue their dreams. In other instances they practiced daily at athletics or music. There was even the story of a woman who became a truck driver. Yes—a woman who drives a big rig. I’m pursuing my dream of writing and being published, and even I found it inspiring and empowering. Thanks, Ms. Rose.
(reviewed within a month of purchase)

If you're interested in a Study Guide to accompany the book, email me your request for a FREE guide and save $.99. My email addy is jqrose at gmail dot com. I will send you a PDF copy suitable for printing.

Download a sample or purchase the book at Smashwords and


Amazon as well as Kobo, Barnes and Noble, and Sony.