An' the Gobble-uns 'll git you Ef you Don't Watch Out! 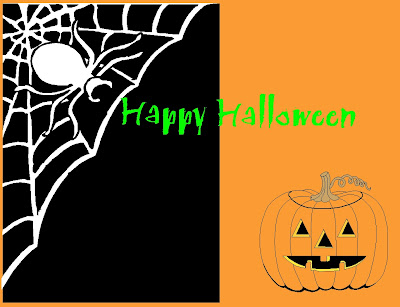 Wishing you a Safe and Happy Halloween!

Below is an excerpt from one of my favorite poems for Halloween, Little Orphant Annie by James Whitcomb Riley. To read the entire poem, go to  Riley's Children's Poetry Site. Read this poem written in the 19th century by this beloved American poet out loud and enjoy!

An' one time a little girl 'ud allus laugh an' grin,An' make fun of ever' one, an' all her blood-an'-kin;An' wunst, when they was "company," an' ole folks wuz there,She mocked 'em an' shocked 'em, an' said she didn't care!An' thist as she kicked her heels, an' turn't to run an'hide,They wuz two great big Black Things a-standin' by her side,An' they snatched her through the ceilin' 'for she knowedwhat she's about!An' the Gobble-uns 'll git youEf youDon'tWatchOut!
Posted by J.Q. Rose at 8:48 PM No comments:

Thank you to Carol Simon Levin for sharing this article about Emily Warren Roebling.

On December 12, 1881, people in New York City would have witnessed a strange sight.  High above the East River, men in business suits were walking cautiously along a narrow path of wooden boards laid across the steel frame of a huge bridge.  Strangest of all, the line was led by a woman, her long skirt billowing as she showed them details of the construction.  When they reached the New York side, everyone toasted her with champagne.  It was the first official crossing of the Brooklyn Bridge.

In 1881, women could not vote in most state and federal elections.  Their minds and bodies were considered weak and fragile. Very few colleges accepted female students and, though poor women worked, it was unthinkable for respectable middle and upper-class women to do so.  They most certainly would not be helping to supervise the greatest construction project of the age.

But Emily Warren Roebling was doing just that.

After her husband Washington Roebling, the Chief Engineer of the bridge, became an invalid from injuries received on the project, Emily became his eyes and ears, feet and hands and voice.  She started out carrying his orders back and forth to the site. When he became unable to read or write, she read aloud all written material to him and wrote his responses. Since Washington could not talk to anyone but Emily without becoming exhausted, he began discussing all the details of the bridge with her, expecting that she would explain these to the assistant engineers.  As a result, although she never went to an engineering university, Emily gradually learned quite a lot about bridge engineering.

For nearly eleven years, the bridge company kept her work a secret. (They worried that the public would lose confidence in the safety of the project if they knew a woman was involved.)  Her role was finally revealed on May 24, 1883 at the opening ceremonies when Congressman Abram S. Hewitt honored her work in a speech.
Later that day, The Brooklyn Eagle publicly praised Emily in its article on the opening of the bridge:
Great emergencies are the opportunities of great minds.  Mrs. Emily Roebling met this difficulty as nobody else could.  She addressed her remarkable intelligence to the acquisition of the higher mathematics...  She mastered this most bewildering of sciences, applied it to the bridge, was in rapport with her husband, and dazzled and astounded the engineers by her complete and intelligent conception of their chief’s theories and plans…Day after day, when she could be spared from the sickroom, in cold and in wet, the devoted wife exchanged the duties of chief nurse for those of chief engineer of the bridge, explaining knotty points, examining results for herself, and thus she established the most perfect means of communication between the structure and its author.  How well she discharged this self-imposed duty the grand and beautiful causeway best tells.

Emily did not rest on her accomplishments. After the bridge, she helped design the family mansion in Trenton, studied law, attended the coronation of the Tsar of Russia and even took tea with Queen Victoria.  At the time of her death, she was called “one of the most distinguished women in the country” and “the most famous woman in New Jersey” – yet today most people don’t even know her name!
If you walk across the bridge, be sure look  at the bronze plaque on the East Tower.  It states:

The Builders of the Bridge
Dedicated to the Memory of
Emily Warren Roebling
1843-1903
whose faith and courage helped her stricken husband
Col. Washington A. Roebling, C.E.
1837-1926
complete the construction of this bridge
from the plans of his father
John A. Roebling, C.E.
1806-1869
who gave his life to the bridge
“BACK OF EVERY GREAT WORK WE CAN FIND THE SELF-SACRIFICING DEVOTION OF A WOMAN.”

Carol Simon Levin is a librarian at the Somerset County Library and a member of the New Jersey Storyteller’s Network. She impersonates Emily and other forgotten women in presentations available for libraries, senior centers, historical societies and other venues.   Programs are accompanied by a "lantern slide show" (PowerPoint) with photographs and lithographs.  They can be tailored for adult or youth audiences. For further information, write her at cslevin59 (at) gmail (dot) com.  For more information about Emily Roebling, check out www.bridgebuilderinpetticoats.com.

Update on Malala, the Girl from Pakistan

ABC News Diane Sawyer devoted an entire hour to the story of Malala Yousafzai, the girl who defied the Extremist Taliban. She was the girl who spoke up and brought awareness to the plight of 15 million girls in Pakistan who could not get an education. The Taliban did not want girls to go to school, so they thought they would get rid of Malala and stop girls from getting an education. Instead, by shooting Malala while she was riding on the bus to school, they have created even more girls who are fighting to receive an education and to make the world a better place for all of us.

Sawyer reported the miracles that occurred to keep Malala alive after the shooting and to bring her back from the dead. Her recovery was slow and painful, but she is doing well and is spreading the word about education for girls worldwide.

Malala was a candidate to receive the Nobel prize for being a spokesperson for education and peace, but she was not chosen. Below is a link to a video at abcNews with reactions from school girls in Pakistan. I'm sure girls everywhere would feel the same as they do.


“Never doubt that
a small group of
thoughtful, committed citizens
can change the
world. Indeed, it is
the only thing that
ever has.”
-Margaret Mead

I am not sharing Malala's story to encourage girls to risk their lives, but I am sharing it to make girls who are fortunate to have the opportunity to gain an education to actually appreciate what we have. Perhaps they too will be inspired by Malala's actions to make the world a safer place filled with peace for everyone.
Posted by J.Q. Rose at 11:03 AM 2 comments:

Ms. Yellen is presently the #2 person at the Federal Reserve behind the retiring chairman, Ben Bernanke. His tenure will end January 31, 2014 and Yellen will assume her duties as the Chairman if approved for the position. Keep your fingers crossed she will break down this barrier for women.