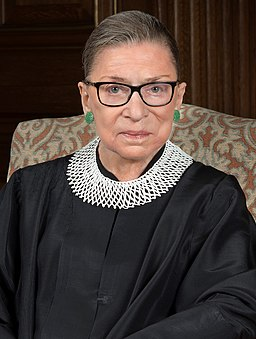 This week we lost a warrior for women, Supreme Court Justice Ruth Bader Ginsburg. She was one of the most outspoken advocates for gender equality of our time, including voting rights and equal pay for women. Ginsburg, who served as a Justice of the Supreme Court for 27 years, was the first female Jewish Justice.

She was a feisty woman, small in stature but big on women's rights. By fighting for justice for everyone she made a difference in today's world that will affect future generations.  Justice is a title for a judge, such as Justice Ginsburg. According to the dictionary, the word justice is used to mean "the quality of being just, impartial, or fair." Qualities that describe a judge.

When asked how she wanted to be remembered, she replied, “Someone who used whatever talent she had to do her work to the very best of her ability. And to help repair tears in her society, to make things a little better through the use of whatever ability she has.”