A Ghost Story for a Happy Halloween

I have a great novel for middle-grade readers.
It includes GHOST stories. They certainly fit in with the Halloween spirit today.

Back of the Book:
Historical fiction ghost stories set in the mid- 1800’sThe schooner’s captain pulled 12-year-old Honor Sullivan apart from the other orphans. Captain Klaus claimed he needed a strong lad like Honor for a sister he didn’t even have. But Honor has a sister – two of them. The last he’d seen of their fuzzy red heads was the end of September 1854, as they headed down the ship’s plank for the Orphan Train, going off to be placed out with a new family.Tricked by the captain, and sailing around Michigan’s Mitten, Honor learns the ropes and duties of a sailor. He passes the time aboard down in the dark hold, listening to Old Salty’s tales of shipwrecks and ghosts. The stories won’t distract him for long, though. As soon as he can, Honor plans to abandon ship and go in search of his sisters. 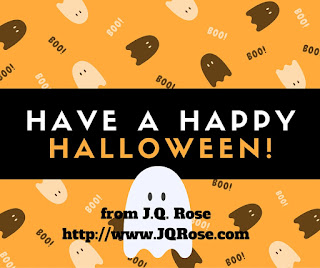 J.Q. Rose
Whether the story is fiction or non-fiction, J.Q. Rose is “focused on story.” She offers readers chills, giggles and quirky characters woven within the pages of her mystery novels, but truth in her memoir, Arranging a Dream. Using her storytelling skills, JQ provided entertainment and information in non-fiction articles featured in magazines, newspapers and online magazines. Blogging, photography, Pegs and Jokers board games, and travel are the things that keep her out of trouble. She and her husband spend winters in Florida and summers up north with their two daughters, two sons-in-law, four grandsons, one granddaughter, two grand dogs, four grand cats, and one great-grand bearded dragon.